The Rise of the Alt-Right, Thomas J. Main 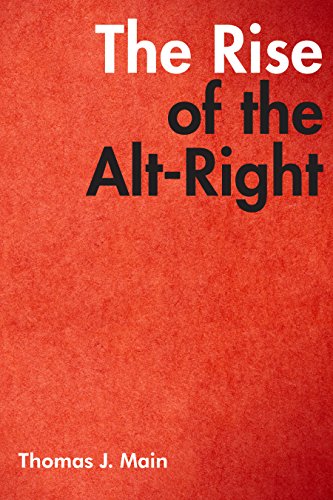 The rapid growth of the so-called alt-right (the latest iteration of the white nationalist movement) was among the more surprising and disturbing developments of the 2016 U.S. presidential election cycle. The term “alt-right” has since become a fixture of U.S. political discourse, though I would argue that the movement has mostly imploded over the last few years. It nonetheless warrants scholarly attention.

As a movement, the alt-right was deliberately amorphous and confusing. In this book, Thomas J. Main attempts to clarify the philosophical foundations of the alt-right and simultaneously explain why the alt-right worldview is built on erroneous premises.

Main’s second chapter, in which he attempts to gauge the size of the alt-right at the time of writing, is arguably the book’s most important contribution. Estimating the size of a mostly online and predominantly anonymous movement requires a lot of guess work. Main relies on web traffic, one of the few available empirical measures we have. He determines that the alt-right’s leading websites had audiences comparable in size to important mainstream venues such as the Washington Monthly and Harper’s. Its readership was much smaller, however, than that of larger and more mainstream right-wing political publications such as Nati

Jeh Johnson on the State of American Democracy
Click below to read the transcript or watch the recording.