Reviewed by Robert B. Horwitz 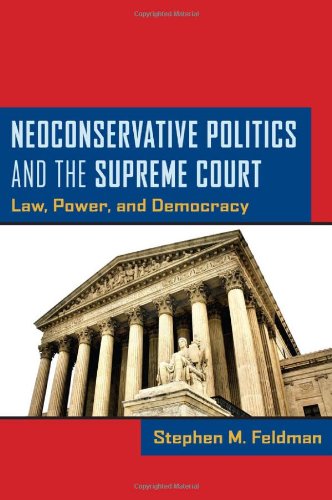 In this concise and clearly written book, Stephen M. Feldman argues that the conservative ascendance in the United States since the presidency of Ronald Reagan can be understood as an effort to reestablish the legal and political order that existed prior to the New Deal. He labels this pre‐New Deal order “republican democracy,” distinct from the “pluralist democracy” that character­izes our politics since 1937. The heart of the book is the analysis of the Supreme Court and how its conservative majority has pushed this agenda. But to get there, Feldman must establish the broad historical‐political‐legal context. For the book is as much a political argument as it is legal analysis.

Indeed, Feldman suggests, the conservative ascendance is actually the tri­umph of neoconservatism, with its characteristic distrust of government’s ability to get things done, embrace of the “moral clarity” of virtue and the common good (no relativism here) and American exceptionalism. Unlike other manifestations of American conservatism, such as traditionalism, country‐club Republicanism, and libertarianism, neoconservatism has many fewer qualms about utilizing the power of the state—so long as the state’s actions are of the right kind. And the right kind are a