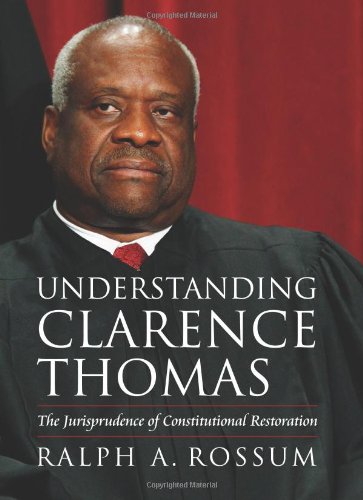 U.S. Supreme Court justices can be some of the most compelling, although elusive, figures in American government. One of the most personally and intellectually compelling justices on the current Supreme Court—arguably, the most—is Clarence Thomas, the subject of Ralph A. Rossum’s engaging new book. Justice Thomas has a remarkable and inspiring life story and, in more than 20 years on the Court, a body of jurisprudence that has helped him become one of the most original and intellectually serious constitutional decision makers in American law. Still, Thomas remains a misunderstood, and often vilified, figure. Rossum, however, deftly navigates Thomas’s background and writings in a way that—even if not enough to change the minds of Thomas’s critics—at least should improve public appreciation for Thomas’s work. Understanding Clarence Thomas is an apt title.

Rossum offers the reader a detailed journey through a judicial labyrinth, exploring both well-known and obscure Thomas opinions. Rossum does not review every area of constitutional law on which Thomas has written. But because his depth is so impressive, it feels as if he does. Rossum’s chief purpose (at which he succeeds) is to reveal and dissect Thomas’s approach to adjudication, what Rossum calls the “original general mean