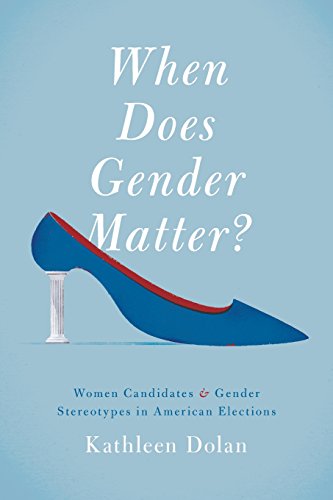 Journalists, pundits, laymen, and scholars interested in women’s representation have been searching after, for several decades now, the smoking gun in women’s continuing underrepresentation in elective office. In When Does Gender Matter?, Kathleen Dolan takes on the prevailing belief and a significant body of academic research suggesting that gender stereotypes have a potent effect in holding women back. This is a bold endeavor given the entrenched conventional wisdom that women in politics are subject to detrimental stereotypes—that stereotypes are the smoking gun.

Dolan’s panel study first examined potential stereotypes in candidate evaluations, then tied those stereotypes to voters’ actual vote choices. Her methods allow her to make a strong and consistent case that women running for office are rarely subject to stereotyping that leads to gender-based discrimination at the ballot box. She finds that individuals offered inconsistent stereotypical evaluations of both male and female candidates. Furthermore, the stereotypes that were expressed seemed to have little impact on how voters ultimately made their vote choices.

What did matter in both the evaluation of candidates and vote choices was political party. A respondent’s party (as well as ideology) predicted everything from attitudes toward women in po