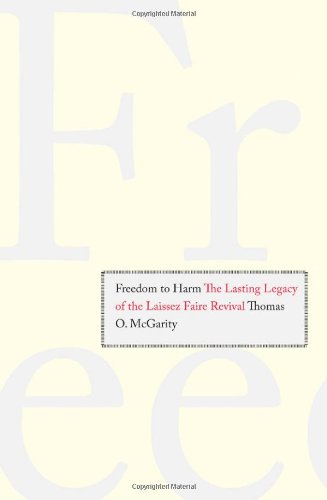 The central claim of this book is that between 1975 and 2005 three broad assaults on the nation’s regulatory infrastructure substantially weakened the reforms of the Progressive Era, the New Deal, and the Public Interest Era. A secondary claim is that these assaults were driven by laissez‐faire ideologues working from within various think tanks, the media, and, eventually, the halls of government.

The first claim is impossible to dispute, and Thomas O. McGarity provides ample evidence for it. The second is quite plausible, although, because McGarity is not interested in measuring the effect that ideologues had on the assaults, the extent to which they “drove” them is not clear. Ideologues pushed for change, and change happened; the tone is more mono‐causal than conspiratorial, but it may frustrate social scientists seeking a testable social theory. As it is, readers can only wonder about the odds—in a world where ideologues are the shapers of policy—of his quite sensible suggestions for reform ever seeing the light of day. McGarity might have done better simply to treat the past 50 years as a familiar chapter in the ongoing historical struggle to establish the proper role of government. Whether ideologues were uniquely important to this chapter is certainly of less imp