The Rise of the Representative: Lawmakers and Constituents in Colonial America, Peverill Squire 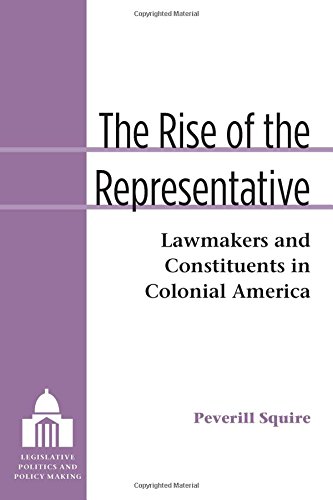 Politics in early British America was diverse. As Peverill Squire documents, there was no consensus even about what representatives should be called, with various names in use, from “Burgess” to “Deputy” (pp. 159–160). This wide-ranging exploration of representational practices is therefore a remarkable achievement. Drawing on a huge base of qualitative and quantitative data, Squire analyzes the relationship between lawmakers and their constituents in the 13 British colonies that rebelled to form the United States. He argues that this relationship was shaped by pragmatic responses to “governing problems” (p. 2), which pushed colonial politicians to be ever more attuned to their voters’ particular interests. This practical transformation, Squire contends, underpinned the rise of “Jacksonian Democracy” (p. 8).

The book builds on Edmund Burke's distinction between the trustee and delegate models of representation, in which elected representatives either exercise individual judgment for the common good of society (trustee behavior) or seek to directly reflect the interests of those who elected them (delegate behavior). Squire argues that New England had a delegate model from its foundation but that legislative practices in other regions evolved from a trustee to a delegate model. Constituents’ gr