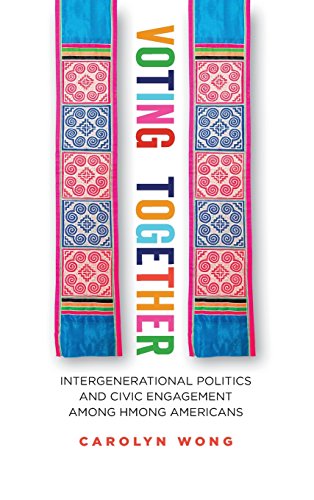 The Hmong are considered a relatively newer ethnic group in the United States, having only been in the country for just over 40 years. Since the 1990s, a growing number of political candidates have emerged from the Hmong community. At the end of the 2016 general election season, there were more than a dozen individuals who identified as Hmong or Hmong American in political office. Despite this ethnic group appearing to be beating the political odds stacked against them, the academic scholarship has often concentrated on the Asian American community at-large or more populous ethnic groups. Carolyn Wong's book fills this void by providing what is likely the first in-depth analysis of Hmong political and civic engagement in the United States.

The book provides an examination of Hmong political involvement and addresses the contributing factors that led the ethnic group to embrace a more participatory role in politics. Rather than draw from tradition models of political participation that do not adequately explain this group's political participation, Wong instead draws on the theory of social voting. Wong argues that these social mechanisms underlie the propensity for individual political involvement and encourage younger Hmong individuals to ensure that politics in the United States is accessible to their older Hmong counterparts. Social interaction between young and old contribute to the making of a political identity steeped in a collective desire for equality and inclusion.

Wong's extensive research in the field is demonstrated throughout the book in several ways. First, the crux of her argument relies on the authenticity of stories and experiences obtained from her interviews. Wong presents a mound of evidence to support her argument through more than 100 interviews with members of the community, including high school youths and elected officials. Individuals hailed mostly from Fresno, California, and St. Paul, Minnesota. Second, Wong demonstrates an understanding of the preexisting power structure within Hmong communities—a clan structure in which men are often the sole decision makers. Acknowledgment of this structure allows her to provide an in-depth examination of the interplay between it and the larger U.S. political context. Understanding the complexity of the community Hmong individuals must navigate provide legitimacy to the argument of intergenerational politics and the formation of a political identity. By first establishing this context, she is then able to document the struggle individuals face, which is further complicated by these overlapping structures.

Wong's focus on a specific ethnic group that makes up a relatively small proportion of Asian Americans in the United States may be criticized, but the strides Hmong have made in the political context support that the group is noteworthy to study. Individuals who are unaware of the Hmong will find the beginning of the book to be accessible and informative. Those interested in ethnic studies or more specifically Asian American or Hmong studies will find that Wong provides a nuanced understanding of immigrants and refugees and their experiences navigating the political system. The book is a first step in paving a path for further research on Hmong American political engagement.