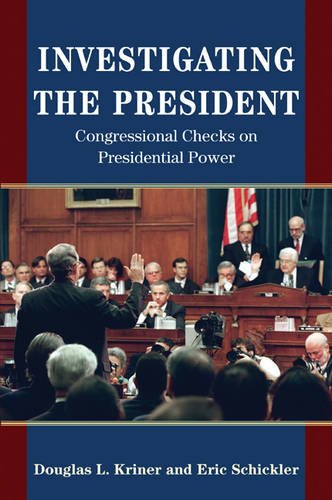 Congress gets no respect. Scholars compete to condemn legislative inaction in the face of presidential expansionism, and for once the ivory tower is in tune with Main Street: public approval of the first branch was at 16 percent in a recent Gallup poll.

Not so fast, say Douglas L. Kriner and Eric Schickler, arguing that existing assessments of the balance of power between the branches has given “short shrift to congressional investigations” into executive branch malfeasance as a means of holding the presidency in check (p. 246). After all, even in a period of “seeming institutional dysfunction,” Congress can “investigate when it cannot legislate” (p. 3). In a nutshell, this book argues that investigations are not rare; they do lead to change; and they are partisan, but less so in the Senate.

The first congressional investigation was a 1791 inquiry into the disastrous St. Clair military expedition. That was also the first politicized congressional investigation: Jeffersonians used the occasion to attack leading Federalists, notably, Secretary of War Henry Knox. Over time, Kriner and Schickler show, investigations systematically lead to declining presidential approval ratings—about 2.5 percent for every 20 days of hearings in a month (p. 88).

But inflicting political damage is only one way in which i

The Myth of Presidential Representation, B. Dan Wood Reviewed by Andrew Rudalevige

Presidents, Responsiveness, and Competence: Revisiting the "Golden Age" at the Bureau of the Budget, Matthew J. Dickinson and Andrew Rudalevige