Beneath the Surface of White Supremacy: Denaturalizing U.S. Racisms Past and Present, Moon-Kie Jung 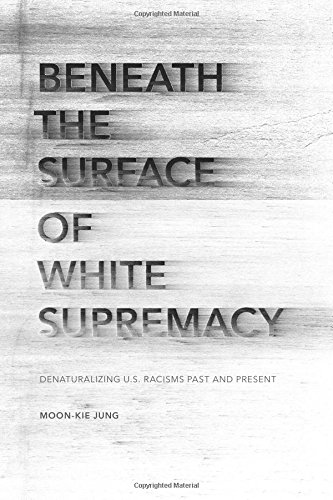 Moon-Kie Jung’s book begins with an extended discussion of the police killing of an African American teenager in Champaign, Illinois. Jung considers local reactions to the shooting. Whereas black residents criticized the police department and the city’s reaction, white residents sided with the city and the police and blamed the black teenager for his own death. This discussion allows Jung to raise two questions that are carried throughout the book: first, why do whites and nonwhites have different views of racism or racist events, and second, how does antiblack racism affect nonblack people of color? Jung posits that we need to conceptualize racism as an ideology and a structure to answer these questions.

The second chapter begins this task by outlining a theory of racism. Jung contends that Eduardo Bonilla-Silva’s structural theory of racism, which endeavors to move racial theories beyond the realm of ideology, requires a more complex understanding of structure and a clearer articulation of how the dominant racial ideology accords with societal power relations. Jung relies on William Sewell, Jr.’s theory of structure for this purpose. Jung redefines racism as “structures of inequality and domination based on race” (p. 49). The structure of racism refers to the “reiterative articulation of schemas and resources through