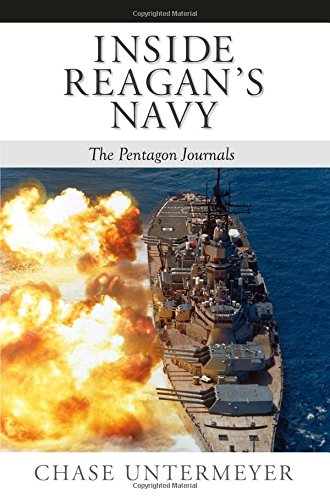 Chase Untermeyer has already made a name for himself as a bureaucratic diarist of the Ronald Reagan era. His When Things Went Right ably recounts the first two years of the Reagan presidency, when Untermeyer served as executive assistant to Vice President George H.W. Bush. His new book, Inside Reagan’s Navy, serves as that work’s successful sequel. Inside Reagan’s Navy follows Untermeyer’s stint at the Department of the Navy, first as assistant secretary of the navy for installations and facilities, then later as assistant secretary of the navy for manpower and reserve affairs. From this unique vantage point, Untermeyer witnessed the changing politco-military structure of the last days of the Cold War and the formal ascension of American hegemony. During Untermeyer’s time as assistant secretary, the U.S. Navy not only engaged threats in Libya and the Middle East but also made major strides toward its stated goal of a 600-ship fleet. Inside Reagan’s Navy provides a nearly day-by-day account of this transformative period.

As in his previous work, Untermeyer constructs his narrative such that it reflects its original diary format. As a result, treatments of major political incidents show up almost in passing; the bombing of Libya appears in a footnote, and the reaction to the attack on the USS