To Kill Nations: American Strategy in the Air-Atomic Age and the Rise of Mutually Assured Destruction, Edward Kaplan 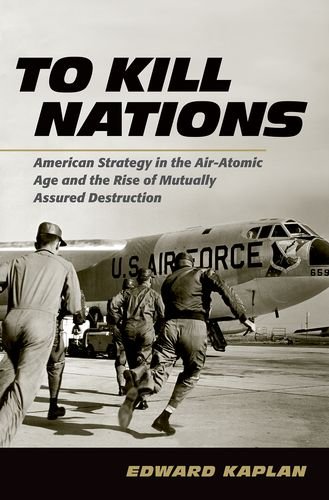 Edward Kaplan seeks to explain “the rise and fall of air-atomic power in the early Cold War” (p. 6). He accomplishes this and more, providing a book that should be widely read by students of nuclear strategy. The broad elements of the story are familiar. Yet the devil is in the details; terms such as “massive retaliation” and “assured destruction” are used imprecisely by many scholars.

Kaplan offers precision by mustering an impressive array of declassified sources to deftly trace the evolving role of American nuclear strategy as interservice politics, civilian leaders, and the changing strategic environment interacted to advance new ideas and operational plans. In doing so, he advances our understanding of U.S. strategic policy.

Kaplan shows how the newly independent U.S. Air Force succeeded in appropriating nuclear weapons into existing concepts after World War II. This led to the advent of air-atomic strategy, which sought to provide the United States with the most efficient and moral path to victory. Initially, this centered on using bombers to destroy Soviet industrial capability. Later, as Soviet nuclear forces grew, the focus turned to an “offensive-defense” (p. 107) that sought to destroy Soviet nuclear capabilities and force Soviets acquiescence. The air-atomic mission assured not only the