Conflict In Ukraine: The Unwinding of the Post–Cold War Order, Rajan Menon and Eugene Rumer 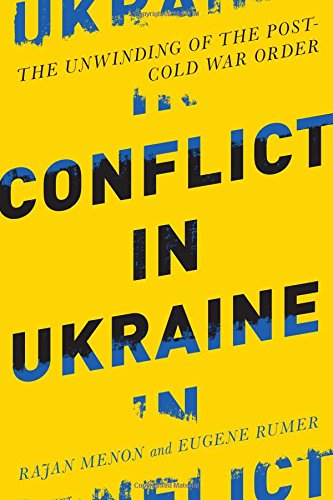 The title and subtitle of this book could very well be reversed: while the book covers the events of the Russian takeover of Crimea and the invasion of eastern Ukraine, it does so in order to make and support the argument that the crisis signifies a turning point for the post–Cold War European political and security architecture and relations between the West and Russia. In short, the argument presented is that the architecture has been torn apart. The authors do a good job of laying out the argument and demonstrating how the calculations of the European Union, the United States, and Russia, and lack of them, led to the Ukraine crisis and the security situation that embroils Europe and the West today. The significance of the security crisis that the West finds itself in is that it is a symptom of an even larger problem for Europe, that is, developing a new strategy for dealing with Russia. In doing so, the West will have to develop and execute a strategy for dealing with the ongoing Ukraine crisis. The book lays out three possible scenarios and projects that the frozen conflict scenario for Ukraine is the most likely.

In discussing the political and economic history of independent Ukraine, the book places weighty emphasis on the actions of various presidents and the East–West divide in Ukraine. This is a little overdone, in that the book gives short shrift to the parliament and to its role in often countering an overreaching executive that did not start with Viktor Yushchenko. Ukraine’s parliament has been much more independent and productive than any other in the post-Soviet space, with the exception of those in the Baltics.

The book does a good job of discussing the political, economic, and international issues over time that have hampered Ukraine and led to the crisis, but the authors claim that these made the crisis almost inevitable. This claim is overstated and minimizes the aggressive intent of Vladimir Putin, who chose to exploit the situation in pursuit of his personal vision of restoring the Russian Empire. The conjecture that Putin did not have plan for taking Crimea lacks credibility, given the military mobilization took place almost instantaneously following Viktor Yanukovych’s fleeing Ukraine.

The book devotes considerable attention to the European Union’s and NATO’s policies toward the former Soviet states and observes that the consensus was to engage them on a wide front from economics to democratization to military and police reform. The authors take the West’s leaders to task for failing to gauge how severe the Russian elites’ reactions might be, in that such elites continued to hold the view that Russian primacy over these countries is a right crucial to Russian identity and its strategic future. They rightly point out that the West seemed to hope that Putin and company would see the benefits to Russia, too, of expanding economic opportunity but failed to have a plan if Russia settled on armed resistance instead.

The authors claim that in reaction to Russia’s military actions in Ukraine, the West and Russia have adopted identical strategies in using economic pressure to change the other’s behavior, to uncertain effect. However, this overlooks that the Russian strategy goes beyond economics, in that Russia has stepped up military activity as well, with bomber flights near Western European countries, expanded military exercises, extension of military bases in the Arctic near NATO countries, and expanded capabilities in Syria. The authors project that because of economic ties with Russia, European NATO members will extend an olive branch to Russia, which is based on the assumption that economics trumps all. We will see whether the West will cave to narrow economic self-interest or recall the factors and decisions leading to their success in defeating the Soviet Union.