Fatal Politics: The Nixon Tapes, the Vietnam War, and the Casualties of Reelection, Ken Hughes 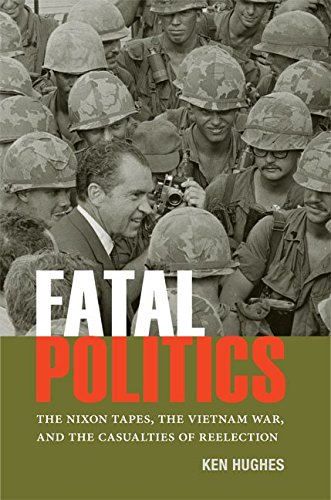 Ken Hughes, a researcher in the University of Virginia’s Miller Center Presidential Recordings Program, has provided a great service to Vietnam War scholars and those interested in understanding the history of the Vietnam War. With hundreds of books having been written using conventional archival sources and oral histories, we have read about the “decent interval,” “madman theory,” sidebar discussions with Le Duc Tho, and Henry Kissinger’s meetings with Chinese leader Zhou Enlai. And, with reasonable citations, we know that the president was preoccupied with ending the war with “peace and honor.” Some historians have also understood and written of Richard Nixon’s cynical use of those terms and accepted the idea that the president’s paranoia would have driven him to be overly concerned about his 1972 reelection.

Now we have the spoken word through the Nixon tapes, and the “back-and-forth” exchange between the president and his national security adviser, that verifies most everything that historians have been saying for years. To read the president’s words even without hearing the emotions expressed is to realize how reelection drove decision making in the later years of the war.