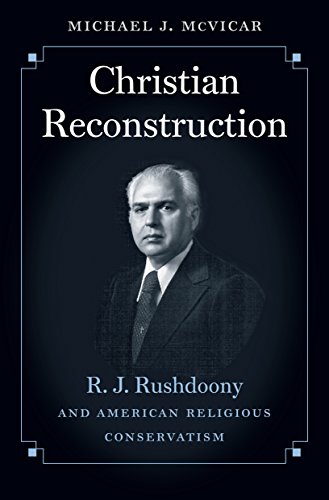 R.J. Rushdoony’s ideas have circulated far more widely than his name. Outside of conservative evangelicals, few Americans could identify Rushdoony, but he left a massive intellectual legacy that influenced the Christian right, home-schoolers, libertarians, and the Tea Party. With Michael J. McVicar’s recent study, Rushdoony finally has the intellectual biography he deserves.

The son of Armenian immigrants, Rushdoony worked tirelessly as a missionary, minister, speaker, and author. He left behind mountains of correspondence with Christians around the United States, and McVicar gained unprecedented access to his archives. McVicar used this access to Rushdoony’s library to construct a complex and compelling portrait of one of the most important—and least well known—American evangelicals of the twentieth century.

Ordained in 1944, Rushdoony began his career as a missionary on the Duck Valley Indian Reservation in Owyhee, Nevada. After eight years on the reservation, he took a ministerial appointment in Northern California and later worked briefly at a conservative think tank, the Center for American Studies. In 1965, Rushdoony got his big break when conservative women activists in the Los Angeles suburbs offered him a salary to teach weekly Bible study classes, leaving much of the week free for Rushdoony to read and write. H