The Invisible Bridge: The Fall of Nixon and the Rise of Reagan, Rick Perlstein 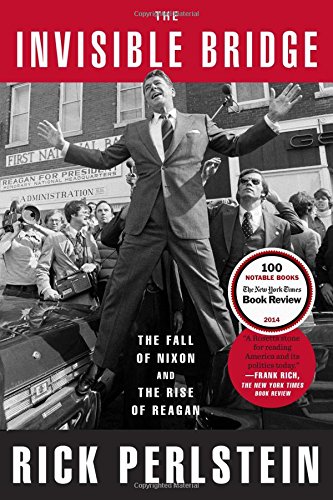 This book covers roughly three years (1973–1976) of American political history. It is less a traditional biography and more a portrait of an era, with four American presidents standing in the foreground. Its focus is supposed to be Ronald Reagan; the title promises that this is the story of his political ascent. But Reagan often falls out of the story completely.

The book opens in 1970 near the end of the Vietnam War. Rick Perlstein introduces his readers to the “suspicious circles,” that large segment of Americans for whom the nation was no longer innocent or just, its leaders no longer trustworthy. This group was a product of 1960s protest movements, especially the widespread disillusionment with the war in Southeast Asia. Opposite them was a group of Americans clinging to the idea of American exceptionalism. While Perlstein does not give this group its own catchy name —I suppose the “New Right” will have to do—they are the ones who became Reagan’s constituents.

About half the book focuses on the Watergate scandal. Perlstein painstakingly documents every political maneuver in this presidential quagmire as well as the era’s many distressing news stories: drugged Halloween candy, airplane hijackings, the Patty Hearst abduction, and wars in the Middle East, to name a few. At times, Perlstein b