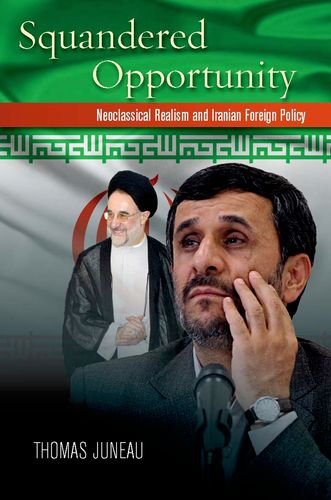 The Islamic Republic of Iran has a long-standing ambition of becoming the dominant power in the Persian Gulf and an influential player in the Middle East. Yet as of 2015, Iran has largely failed to realize its regional ambitions. How exactly did Iran get to this point?

In Squandered Opportunity, Thomas Juneau offers a sophisticated analysis of Iranian foreign policy from 2001 to 2009. Juneau writes, “As a rising power faced with a window of opportunity and surrounded by hostile states—especially in Tehran’s view, the hegemony-seeking United States—Iran should behave like an offensive realist” (p. 2). Instead, the nature of Iranian economic and military capabilities, combined with the Islamic Republic’s domestic pathologies, led Iran to pursue suboptimal foreign policies. Juneau develops a “strategic analysis variant” of neoclassical realism to explain the causes and consequences of Iranian policies in three key areas: its nuclear program, the conflict between the Shiite Arab majority and the Sunni Arab minority in Iraq, and the Arab–Israeli conflict.

According to Juneau, Iran faced a favorable strategic environment following the U.S. invasions of Afghanistan (October 2001) and Iraq (March– April 2003), along with the inflow of hard currency resulting from higher oil prices. Ira