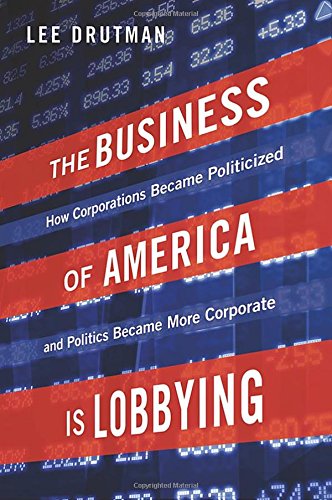 Prior to the Lobbying Disclosure Act of 1995, systematic data on corporate political activity were limited to firms’ electoral activities, and thus most studies of firms’ engagement in politics focused on campaign contributions. As Lee Drutman and others note, however, firms’ spending on lobbying is many multiples of their political action committees’ contributions to candidates.

Drutman’s book builds on Frank Baumgartner and colleagues’ Lobbying and Policy Change by focusing on corporations. The broad thrust of Drutman’s argument is that corporate lobbying has internal momentum, with the best predictor of current lobbying being past lobbying. The mechanism behind this relationship is an agency problem in which lobbyists exploit the informational advantages they have vis-a
a-vis their managers and clients to overpromote the benefits of their services and thus extract unjustified gains. Although others have identified similar agency issues, only Drutman ties them to lobbying’s growth, as well as to broader political and economic harms.

For the general reader, Chapters 1–7 provide a nice background on interdisciplinary lobbying research. The book’s data and narrow focus limit its ability to inform practice and research, however. First, for a book studying firm decision making,