The Passenger Cases and the Commerce Clause, Tony Allan Freyer 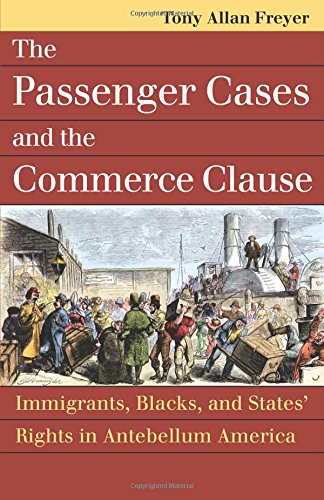 This book examines the political and legal struggles provoked by efforts at various levels of government to manage the growing number of immigrants to the United States during the decades before the Civil War. It considers the background to, the struggle over, and the consequences of the U.S. Supreme Court’s decision in Norris v. the City of Boston and Smith v. Turner, collectively known as the Passenger Cases (1849). The antebellum politics of immigration were contentious enough, giving rise to the anti-immigrant and anti-Catholic Know-Nothing Party, but what Freyer shows is that looming behind these struggles was an even more contentious set of issues related to slavery. The power to regulate immigration, and questions about where that power resided, necessarily reflected on the power of government to control the institution of slavery.

During the early years of the nineteenth century, American governments at the federal, state, and local levels sought to regulate and manage growing levels of immigration. This was particularly important in states such as New York and Massachusetts, which witnessed the highest levels of European immigration in these years. At the heart of these efforts were “alien taxes” levied on immigrants and on the captains and crews of ships carrying immigrants into port. These taxes helped support loca