The Case Against the Supreme Court, Erwin Chemerinsky 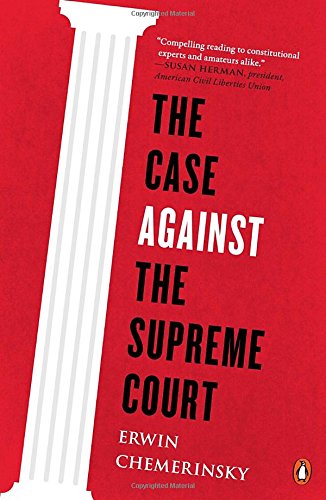 As the contemporary U.S. Supreme Court weighs in on the meaning of marriage equality, the First Amendment’s protections for expression, and the limits of government interventions to structure voting and the availability of health care, veteran Supreme Court litigator Erwin Chemerinsky offers a salient and often scathing indictment of the nation’s highest tribunal: “The Court has frequently failed, throughout American history, at its most important tasks, at its most important moments” (p. 5). Chemerinsky’s detailed historical and contemporary overview of the performance of the Supreme Court challenges perceptions that the Court has fulfilled its constitutional role of enforcing the Bill of Rights against repressive majorities and protecting politically powerless minorities.

Chemerinsky’s case—which could be read loosely as a merits brief—examines the historical issue areas of minority protections, times of crisis, property rights, and states’ rights alongside contemporary issue areas of employee and consumer protection, abuses of government power, and campaign spending in making his case against the Court. The Earl Warren Court is an exception for Chemerinsky, although even here, he argues the Court could have done more to protect those accused of crimes and encourage public school desegregation. Indeed