No Day in Court: Access to Justice and the Politics of Judicial Retrenchment, Sarah Staszak 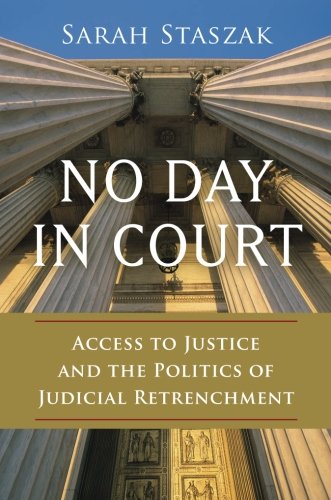 Sarah Staszak’s thoughtful book powerfully makes the case that there is a complex, multifaceted phenomenon of judicial retrenchment. She takes a historical institutional approach to examining the politics and processes that have scaled back access to the traditional court system. By tracing intersecting and overlapping actors who have influenced the progression of judicial retrenchment, she notes that the animating forces behind retrenchment are far from homogenous.

Some forces, such as the conservative antilitigation agenda, are clearly partisan, but other forces are concerned with protecting the integrity of the judiciary. Thus, rather than a unified and concerted effort, retrenchment has been fueled by both classic partisan politics and the ideology of institutional maintenance. Yet the cumulative effect of these various forces has diminished access to the courts, particularly for civil rights plaintiffs (p. 114).

Staszak’s historical approach carefully illuminates the complicated story of judicial retrenchment. She situates her analysis within the literature on institutional change and supports her thesis with four case studies. The first case study is “Changing the Decision Makers,” which examines the growth of alternative dispute resolution (ADR) practices that empowered nonjudicial actors to resolve legal disputes rathe