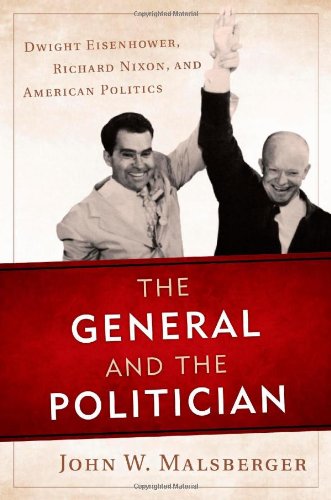 Have you heard the one about Ike and Dick? Too often, the inner workings of presidential administrations are like old jokes, with canned vignettes serving as the punch lines. John W. Malsberger offers a fresh look at the political partnership between Dwight D. Eisenhower and Richard M. Nixon, subjecting old tropes to thorough archival research and placing them in political context. The General and the Politician is a clear and concise political history of the two men’s relationship and their role in shaping the modern Republican Party. It is well titled, for the nature of Eisenhower’s and Nixon’s careers and training—as a general and as a politician, respectively—is essential to understanding both the distance and the dependency in their relationship.

Few in early 1952 would have paired Eisenhower and Nixon together. But this was precisely why they appeared on the same ticket: their partnership was to bind together two wings of the GOP and transform it into “a modern, centrist party” that could compete with the Democrats (p. xv). Eisenhower saw a stronger GOP as necessary to reestablish a vital two-party system, while a large and competitive GOP was essential for Nixon’s political future. But if they agreed on ends, they differed on means. Malsberger points to differences in each man’s backgrounds as the roo