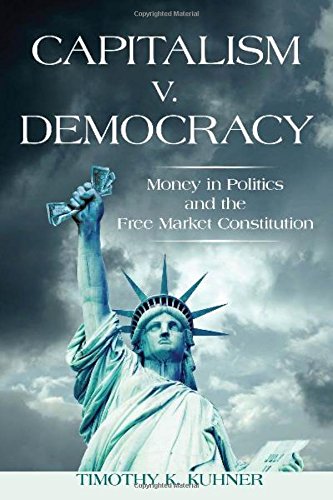 If you are a novice to the area of money in politics, Capitalism v. Democracy: Money in Politics and the Free Market Constitution helps illuminate how the U.S. Supreme Court has arrived at a point that its money in politics decisions are roundly rejected by 70 percent to 90 percent of the American public.

As Kuhner observes, the Supreme Court in its campaign finance cases is oddly becoming one of the last bastions clinging to laissez-faire economics at a historical moment when economists are backing away from the ideology. As Kuhner puts it, “It would be ironic if the ideology that Greenspan recently repudiated—a conceptual framework that assumes a perfect market and resists government efforts to ensure fair play—were discredited within economics but thriving within constitutional law” (p. 31).

Kuhner has assembled some gems of quotes to tell this tale. To answer the perennial question of what the Founding Fathers would think of the market taking over the democratic process, he has many choice quotes fr