Nixon, Kissinger, and the Shah: The United States and Iran in the Cold War, Roham Alvandi 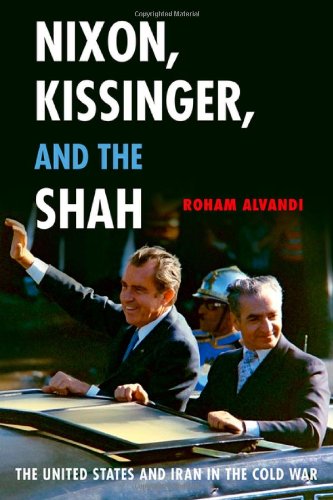 For decades, those books that have dealt with the evolution of the relationship between Washington and Tehran in the 1970s, when the alliance reached its zenith before crumbling under the impact of the Iranian Revolution, have focused either on alleged American responsibility for the authoritarian drift of the shah’s regime or on the degree to which the adoption of a different policy by Washington could have altered the course of events in 1979. Roham Alvandi’s book marks a strong departure from this trend. His innovative volume is not concerned with assessing culpability; its intent is to provide an original interpretation of a partnership—that between Richard M. Nixon, Henry Kissinger, and Mohammad Reza Pahlavi—that “remains, to this day, the high-water mark of the United States’ relationship with Iran” (p. 6). The result is a solid and well-documented account of the alliance that “challenges the static view of the shah’s relationship with the United States” (p. 179) and significantly enriches our understanding of Iran as an international actor.

Through the analysis of three key historical episodes, Alvandi confronts the view of Iran as “a simple Cold War battleground” (p. 179), convincingly demonstrates the country’s evolution from client to partner of the United States during