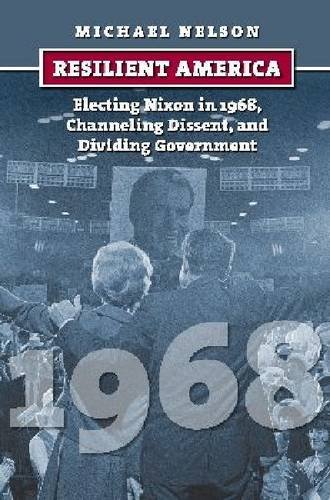 Michael Nelson’s book will be required reading for any historian or political scientist seeking to understand the 1968 presidential election and its importance for the development of contemporary American politics. In Resilient America, Nelson provides compelling and rich descriptions of the leading personalities and issues of one of the most tumultuous elections in American history. Despite the “great strains” that America endured during the 1968 election, Nelson argues, the nation’s “conventional political processes” provided it with the flexibility necessary to remain resilient (p. xiv).

Tracing the process from the 1964 presidential election, Nelson successfully recreates the complex and fluid political context of the 1968 election. The majority of the book focuses on the battles for each party’s nomination and the general election campaigns, culminating in an analysis of the final outcome. Capturing the unpredictability of this unusual election and the efforts of the candidates to cope with the day-by-day changes, Nelson offers a host of unique insights.

Each candidate’s campaign is given detailed attention and placed within the complexity of the nomination process before the McGovern-Fraser reform. That these were the last of the brokered national party conventions makes Nelson’s ma