Fear Itself: The New Deal and the Origins of Our Time, Ira Katznelson


Reviewed by James A. Morone 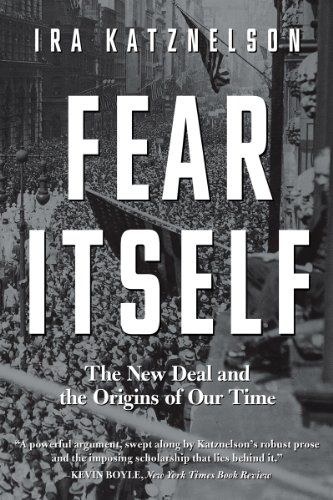 With World War II raging, President Franklin D. Roosevelt moved to guarantee suffrage for 10 million Americans soldiers. According to conventional wisdom, opposition would have been “political suicide.” Scholars later read the measure as a war-inspired, all-American expansion of the vote. Ira Katznelson digs deeper—as he does again and again in Fear Itself—and recovers the lost history. Soldier voting threatened a tiny crack into Southern white supremacy. In two congressional sessions, seething with controversy, the Northern Democrats abetted their Southern colleagues (in order to keep the party unified). When the Northerners finally wobbled, Republicans pitched in to aid the Southerners. In the end, Congress gutted the bill, humiliated the Roosevelt administration, and offered an early intimation of the antigovernment, race-inflected coalition that is so familiar today. Less than a decade later, the United States was at war again. The director of the Central Intelligence Agency declared that the atom bomb should be deployed before Moscow could fully develop its arsenal. President Harry S. Truman dispatched atomic weapons to the Pacific while a handful of men secretly discussed unleashing Armageddon.

Entrenchment: Wealth, Power, and the Constitution of Democratic Societies, Paul Starr Reviewed by James A. Morone

The Conscience of a Liberal, Paul Krugman Reviewed by James A. Morone