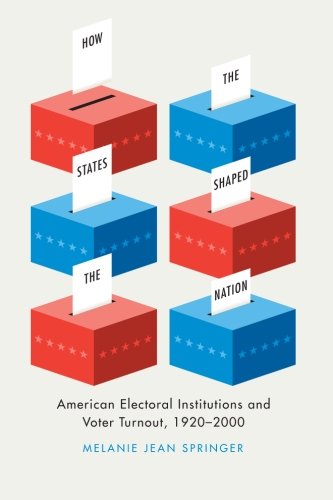 In this book, Melanie Jean Springer contends that U.S. voter turnout should be understood in the context of federalism with state-level election laws that influence participation rates. She demonstrates in How the States Shaped the Nation that the effects of restrictive voting laws are relatively uniform, whereas the effects of expansive laws are not. Her work has important implications for electoral reform efforts designed to stimulate voter turnout.

When compared with other democracies, average national turnout in the United States is notoriously low. However, Springer makes the case in Part I of the book that this is an overly simplified measure; voter turnout is not as waning as the national average would have one believe. When disaggregated by state and region, turnout in presidential and nonpresidential years is usually above the national average in the Midwest, West, and Northeast, while it is well below average in the South. This section also includes a well-written compre­hensive history of expansive and restrictive voting laws during the time period of interest.

The major empirical analyses are found in Part II of the book. Springer estimates a series of cross-sectional time-series analyses in Chapter 5 to test the effects of various electoral institutions on voter turnout across states beyond the effects of electoral competiti