Chasing Shadows: The Nixon Tapes, the Chennault Affair, and the Origins of Watergate, Ken Hughes 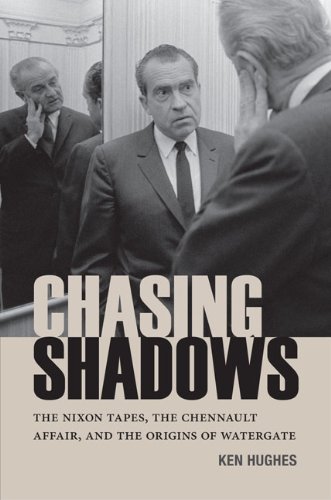 With hundreds of books on Watergate, it might seem as though there is nothing left to learn about the scandal. Ken Hughes’s new book proves otherwise. Hughes, who has been painstakingly transcribing the Nixon tapes for many years as a researcher at the Miller Center’s Presidential Recordings Program, makes extensive use of the tapes to argue that the origins of Water­gate can be found in Richard Nixon’s illegal efforts to sabotage the Vietnam peace talks during his run for the presidency in 1968.

Faced with the prospect that President Lyndon B. Johnson might get all the parties in Vietnam to agree to peace negotiations days before the election, and thus give a boost to Democratic challenger Hubert Humphrey, Nixon, working through agent provocateur Anna Chennault, convinced the South Vietnamese to back out of the talks by promising them a better deal as president. After winning the election, Nixon, who (wrongly) had come to believe that Johnson had evidence directly implicating him in the affair, created an illegal investi­gative unit within the White House, the Plumbers, and ordered it to burglarize the Brookings Institution, where he (again mistakenly) believed the evidence to be. While the Plumbers never burglarized Brookings, they were subsequent­ly caught burglarizing the Democratic offices at the Watergate complex, the crime t