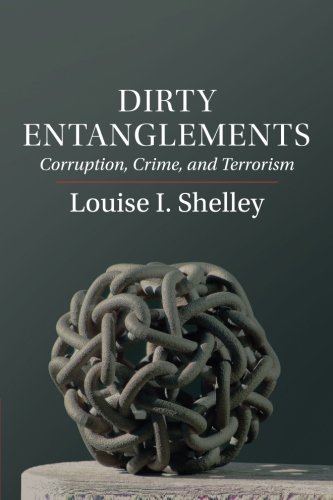 Criminologist Louise I. Shelley has a simple and scary message: the shadowy worlds of terror, crime, and corruption have transformed and become increas­ingly intertwined, representing a rapidly growing threat.

Tracing these “dirty entanglements,” however, is far from a simple task. Shelley provides a sweeping global survey, sometimes straining to connect all the dots from case to case and place to place. She points to all the ways that crime and corruption—from the use of fake IDs to drug dealing to bribery of cops and other officials—have enabled and facilitated terrorism. Shelley contends that crime, corruption, and terrorism have traditionally been exam­ined as separate phenomena but that this no longer makes sense in a globalized and chaotic post–Cold War world. While corruption and crime can exist in the absence of terrorism, Shelley argues, terrorism depends on corruption and crime, and scholars and policymakers have not woken up to this new reality.

Perhaps the greatest strength of Dirty Entanglements is to push security scholars and analysts to think more like criminologists and to push criminol­ogists to pay more attention to security issues. Crime and security concerns have indeed been too artificially separated in the past (both in academia and in the policy world), and Shelley has been at

Drug Diplomacy in the Twentieth Century, William B. McAllister Reviewed by Peter Andreas

The Escalation of U.S. Immigration Control in the Post-NAFTA Era, Peter Andreas