The New Arabs: How the Millennial Generation Is Changing the Middle East, Juan Cole 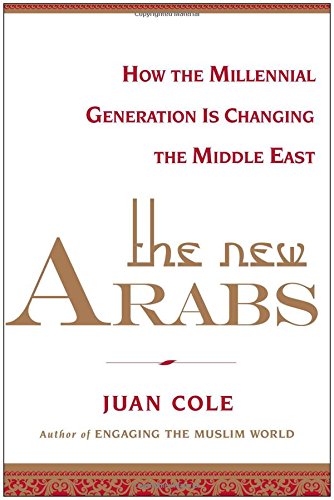 Pessimism about the prospects for positive change in the Arab world runs rampant amid the chaos of Libya and Syria or Egypt’s revitalized authoritari­anism. It is far too soon to give up, according to Juan Cole in The New Arabs. The Middle East is only at the beginning of a long process of change, and it is the rising generation of empowered, wired youth who will determine its outcome. Cole’s counsel of guarded optimism and emphasis on long-term trends offers a useful—albeit partial—corrective to common verdicts on the failure of the Arab uprisings.

Cole offers detailed and well-crafted, if familiar, narratives of the rise of political mobilization, the dizzying early days of the Arab Spring, and the tough political battles that followed. The great strength of Cole’s engaging book lies in his determination to seek out and learn from the young Arabs on whom he focuses. Cole, a popular and influential blogger, is a leading historian with deep expertise in Egyptian history. He combines a deep historical perspective with the immediacy of his interactions with these young, cosmopolitan acti­vists, many of whom he met through their awareness of his online writing. At times, his close identification with these activists can get in the way, as in his overly sympathetic account of the Tamarod campaign that led to Egypt&rsqu

Why War? The Cultural Logic of Iraq, the Gulf War, and Suez, Philip Smith Reviewed by Marc Lynch