A Scrap of Paper: Breaking and Making International Law during the Great War, Isabel V. Hull 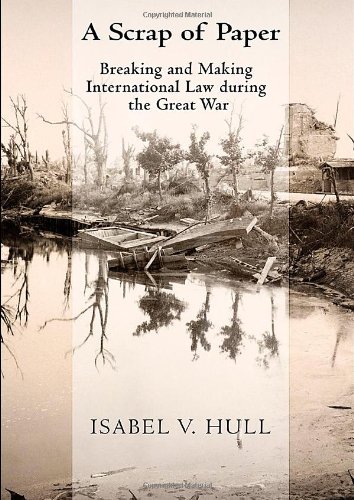 Isabel Hull’s analysis of international law during World War I is a welcome and valuable contribution to an emerging body of scholarship on the laws of war. This is not to undercut its place in the historiography of World War I. Hull rightly points out that most histories of the war have tended to gloss over or even dismiss the role of international law in the war. Hull corrects this bias by delving into British, French, and particularly German archives to show that international law was very much on the minds of all parties to the conflict. Indeed, she argues that preserving the existing structure of international law was a major reason for the outbreak of war.

Hull’s main argument is that views of international law varied across belligerents. The primary fault line lay between Germany and everyone else. The British, French, and Americans argued constantly about the rights of neutrals, obligations of occupying parties, and legal limits on how prisoners of war could be treated. The Germans, argues Hull, interpreted international law in view of military necessity; law was meant to serve belligerents, and could certainly be trumped in the face of the demands of war. And contrary to the logic that it is weak states that favor int