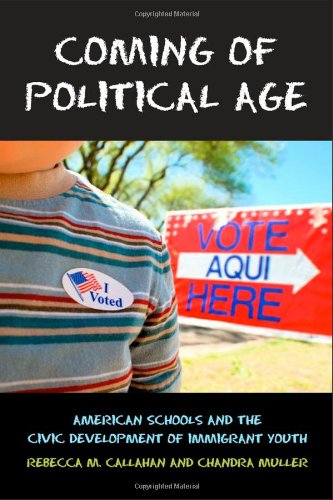 In this insightful study, Rebecca M. Callahan and Chandra Muller show the importance of the national educational system of the United States in the social and civic integration of children of immigrants—one of the fastest­ growing segments of the U.S. population. The relevance of education, and public education in particular, has been highlighted, as mentioned by the authors, in the education program “No Child Left Behind,” initiated by President George W. Bush in 2001 and in “Race to the Top.” one of several programs initiated by the administration of Barack Obama.

The political participation of youth in America is a highly relevant topic for the analysis of American society and one that could reveal interesting clues about the future political demographics of the country. Such an analysis canonlybeenrichedbylookingatthe role that couldbeplayedbythe children of immigrants, including those who have been raised in America.

Callahan and Muller contribute to our knowledge about immigrant youth by analyzing one aspect not studied before. While previous research on children of immigrants has shown the importance of this sector of the