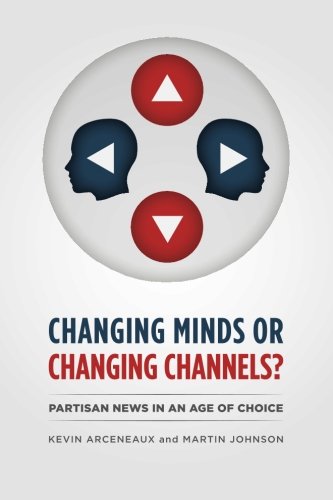 This is a study of “media effects” on American public opinion. It begins with a clear‐headed review of the debate about the “hypodermic model” of strong persuasive effects versus “minimal effects,” of the shift of interest to agenda setting, priming, and framing effects. What it misses, however, is what we know from regular media reports of survey results and the history, for example, in Benjamin Page and Robert Shapiro’s The Rational Public (1992), that aggregate public opinion changes for understandable reasons, even in cases of short‐term fluctuations, in a manner related to new information typically found in the news media. John Zaller emphasizes in The Nature and Origins of Mass Opinion (1992) that this news impact is most likely to occur when it reflects elite‐level agreement, in contrast to ideological or partisan disagree­ment that would lead the opinions of Democrats and Republicans in the mass public to diverge. Though originating from leaders, these are media effects that have changed in recent years in the sense that there has been increasing partisan divergence among the public across a full array of policy issues. This divergence has followed ideological polarization at the elite level since the 1970s, and it is the motivation for Kevin Arceneaux and Martin Johnson’s excellent book.

The book takes off from two points. One is the claim that as part of the great expansion of cable television, partisan news talk shows (and by exten­sion new trends in online and through social media), with Fox News (for example, O’Reilly Factor)onthe rightand MSNBC(Rachel Maddow Show) on the left, have helped cause this ideological “sorting” if not mass polariza­tion. The other is, as Markus Prior’s Post‐Broadcast Democracy (2007) ground‐breaking book emphasized, the way in which media expansion has led news junkies to avail themselves of more political information, and, by extension, has led partisans to selectively choose more‐partisan sources. More important to Arceneaux and Johnson is Prior’s compelling observation that individuals who are not interested in politics have more sources to pursue entertainment or other interests—“choices to screen out news altogether” (p. 53). The authors rightly see how this screening out, along with the selective exposure of partisans, confounds all observational studies searching for the media’s causal effect on partisan conflict. It therefore limits what we can learn about real‐world behavior from experiments that force exposure to media content.

To remedy this, Arceneaux and Johnson devised and conducted a set of 11 original randomized experiments, including some that allow some subjectcontrolled selective exposure to entertainment versus news programs; and others, adapted from medical trials research, that first find out whether subjects prefer entertainment versus news media, in order to examine the effects of news show exposure on individuals who normally would not view such programs. The experiments included nearly 1,700 subjects—not just university students but also diverse sets of temporary office workers and adults from an online survey panel. Specifically, these studies examined the persuasive effects of news talk shows on partisan polarization, the effects of hearing opposing views, agenda‐setting, priming, and framing effects; and the effects on perceptions of media bias and incivility.

The overall results are persuasive. First, as summarized in the meta‐analy­sis in the conclusion, the partisan broadcasts affect some attitudes of likeminded (proattitudinal) news‐seeking partisans. More noteworthy, “counterattitudinal” exposure appears at times to increase, not lessen, certain partisan attitudes—evidence for psychological processes of “motivated reason­ing.” The most important and compelling finding is the extent to which it is the attitudes of entertainment seekers that are most influenced by partisan talk show news. What is key here is that this is not likely to happen widely outside the experiment, because entertainment seekers would not be heavily exposed, if at all, to such news. Thus the authors conclude that any direct partisan media influences that contribute partisan polarization are substantially lim­ited. In this sense, any existing mass polarization could be much worse, but individuals’ choices in the use of mass media lessen the consequences of partisan news outlets. What is also apparent is that changes in the mass media are not the solution to ending partisan polarization and conflict—we need look to the level of political leadership or elsewhere. Partisan news has provided a way to reinforce individuals’ opinions and, as the authors note, their experiments only estimate direct effects of media broadcasts. It is neces­sary to take into account the cumulative effects of partisan news and the subsequent diffusion society‐wide of the ideas and debates that they emphasize.

Will the Outcome be “Democratic”?: Delegate Selection and the 2020 Primaries, Marianna Palumbo and Robert Y. Shapiro

On To the Convention, Again, Caroline Monahan and Robert Y. Shapiro

Americanism in the Twenty-First Century: Public Opinion in the Age of Immigration, Deborah J. Schildkraut
Reviewed by Robert Y. Shapiro

The Opinion Makers: An Insider Exposes the Truth Behind the Polls, David W. Moore
Reviewed by Robert Y. Shapiro

Out of Touch: The Presidency and Public Opinion, Michael J. Towle
Reviewed by Robert Y. Shapiro

Presidential Manipulation of Polls and Public Opinion: The Nixon Administration and the Pollsters, Lawrence R. Jacobs and Robert Y. Shapiro