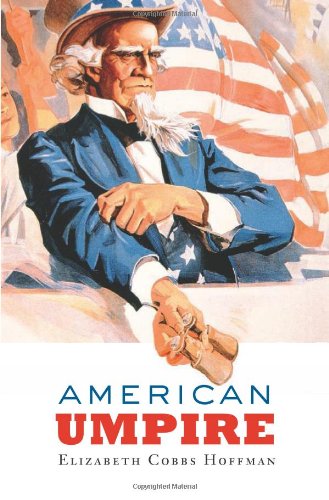 Studies of American foreign policy wrestle with identifying grand themes that illustrate patterns in choices and policymaking, while also recognizing differ­ences that may be unique to an event or result from specific circumstances that often are not replicated. Cast very broadly, the contrast reveals an underlying difference in conceptual approach by political scientists versus historians. As Elizabeth Cobbs Hoffman writes, historians “emphasize contingency, complex­ity, and the unanticipated … Few principles apply all the time” (p. 5). Her monumental work, American Umpire, does both: It argues persuasively that history shows the United States acting as an “umpire” rather than an “empire” in world affairs, and then applies this concept to American foreign policy from the eighteenth century to the present.

By “umpire,” Hoffman means that the United States limits foreign inter­vention to specific goals. The United States stays out of international conflicts until action is needed to require other states to comply with rules that are widely recognized as having “broad legitimacy” (p. 17). Since the late eighteenth century, the United States and other nation‐

How Can Presidents and the Executive Branch Preserve and Protect American Democracy? A Review Essay, Meena Bose

The Steady Leadership of George H.W. Bush: A Review Essay of Destiny and Power, Meena Bose

The Will to Believe: Woodrow Wilson, World War I, and America's Strategy for Peace and Security, Ross A. Kennedy
Reviewed by Meena Bose

The Political Use of Military Force in US Foreign Policy, James David Meernik
Reviewed by Meena Bose