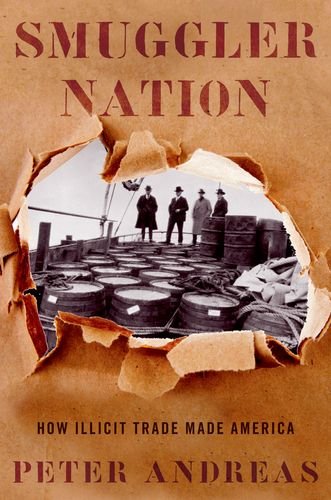 The twin issues of illegal immigration and drug smuggling have dominated discussions about American border security for almost two decades. Hoping to offer historical perspective on these debates, Peter Andreas argues that the United States has never been able to prevent goods or people from entering the country. In Smuggler Nation: How Illicit Trade Made America, Andreas describes the ways that smuggling and policing smuggling have been inter­twined with American history from the American Revolution to the war on drugs. This history shows, Andreas contends, that “smuggling—and attempts to police it—have made and remade America” (p. x).

One of the strongest sections of what is an anecdotal rather than a compre­hensive book focuses on smuggling during the early Republic. Central to the U.S. ability to compete economically with Europe, and in Secretary of the Treasury Alexander Hamilton’s view, to maintain independence, was Americans’ rapid adoption of industrial technology. Though he overemphasizes the role that the theft of British intellectual property played in American industrialization, Andreas makes clear that technology obtained through illicit means played some role in aiding economic growth. At the same time, however, an American government desperate to