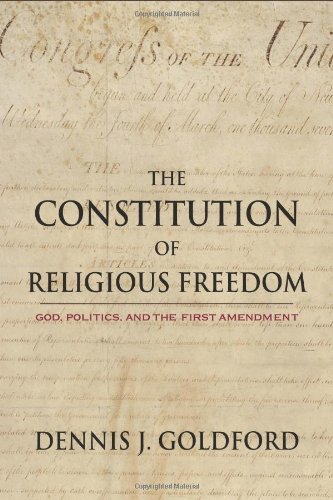 The recent flurry of books on the religion clauses of the First Amendment suggests the durability of both free exercise and disestablishment, as well as the continuing contestations over their interpretation. Although religious diversity has characterized America since the colonial period, diversity has only increased in recent decades (especially since the Hart–Celler Act of 1965), prompting jurists, politicians, scholars, and Americans themselves to consider anew the ramifications of the First Amendment.

Dennis J. Goldford’s contribution to this conversation, The Constitution of Religious Freedom: God, Politics, and the First Amendment,arguesthat “government shall not take a position, nor do anything that amounts to taking a position, on the truth or worth of religion, religious beliefs and values, and religious practices” (p. 213). The U.S. government, Goldford says, is a secular institution and not a theological institution capable of rendering judgment on the merits of particular religions. When the government does so, the author contends, “it creates the structure of implicit coercion by forcing us to choose between what I call our civic identity and our religious identity” (p. 223).

Goldford builds his argument on constitu