FDR and the Jews, Richard Breitman and Allan J. Lichtman 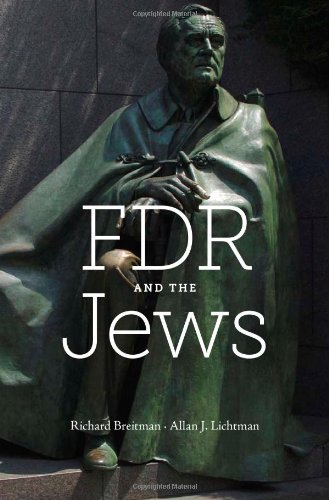 My parents cried at their wedding.

Their tears were not of joy, but of sadness. Their wedding took place on 12 April 1945, the saddest day of the twentieth century for American Jews. Franklin D. Roosevelt died that day. My parents, like many American Jews, believed that they had lost their protector.

Revisionist history was to be less kind to FDR. He was portrayed as an anti‐Semite who could have done much more to save European Jews from the Nazi death camps. He was a patrician who could not–and would not–relate to people of a different background.

Richard Breitman and Allan J. Lichtman, two historians at American University, challenge this view. Roosevelt may not have been the savior of American Jews, as my parents viewed him. But he was “neither a hero of the Jews nor a bystander to the Nazis’ persecution and then annihilation of Jews…. He had to make difficult and painful trade‐offs…. Roosevelt reacted more decisively to Nazi crimes against Jews than did any other world leader of his time” (p. 315).

Their research is exhaustive and their conclusion is compelling. Breitman and Lichtman agree that Roosevelt “did little to assist Jews in

Is Bipartisanship Dead? Policy Agreement and Agenda-Setting in the House of Representatives, Laurel Harbridge Reviewed by Eric M. Uslaner

Congress Behaving Badly: The Rise of Partisanship and Incivility and the Death of Public Trust, Sunil Ahuja Reviewed by Eric M. Uslaner