Spying in America: Espionage from the Revolutionary War to the Dawn of the Cold War, Michael Sulick 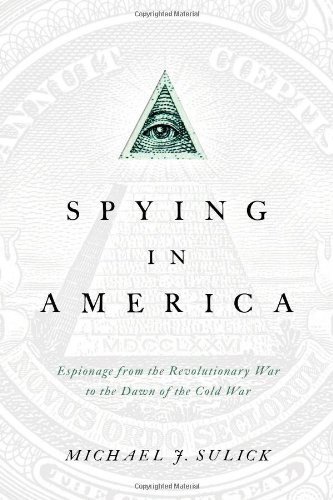 This book is the first of a planned two‐volume set covering espionage against the United States from the Revolutionary period up through today. The author, Michael Sulick, had a lengthy and illustrious career as an intelligence officer at the Central Intelligence Agency (CIA) that culminated in three years at the head of the National Clandestine Service. His book draws almost entirely on sec­ondary sources. (One may imagine that the second volume will also draw, if only implicitly, on his personal knowledge as a counterintelligence practition­er.) The book covers little if any new scholarly ground. However, the author’s message seems to be aimed more at the general public than at scholars.

In the introduction, Sulick offers the thesis that Americans historically have been disinclined to believe that fellow citizens could be spying for foreign powers and also that they have been consistently suspicious of government counterespionage efforts, seeing them as intrusive and even as forms of perse­cution. Sadly, Sulick’s argument is not wholly persuasive. Certainly, the book does contain sufficient evidence to support a prima facie case. For instance, the author points to the case of Benedict Arnold during the Revolutionary War. “Americans from the commander in chief down,”