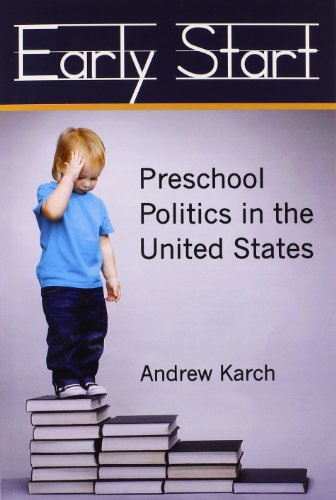 In 1971, Senator Walter Mondale introduced an ambitious Comprehensive Child Development Act that passed both houses of Congress. It was promptly vetoed by President Richard Nixon, who denounced it as an endorsement of “communal approaches to child rearing” (p. 82). Andrew Karch believes that this “watershed” moment had profound, lasting effects on preschool politics in the United States.

Karch asserts that the failure of children’s advocates to enact comprehensive preschool legislation in 1971 (a critical juncture) led advocates to shift their focus to state governments (forum shopping). As the states responded with initiatives of their own, a motley assortment of stakeholder groups emerged that preferred incremental, piecemeal reform over a comprehensive approach (policy feedback). The result, in Karch’s words, is a “fragmented amalgamation of programs and services” (p. 2).

It is always a pleasure to read a public policy book that takes multiple levels of government seriously. This book also has the virtue of introducing an analytic framework early on and sticking to it. Chapter 3, an in‐depth case study of the ill‐fated Comprehensive Child Development Act, is great reading, with lots of revealing quotes from the participants. And the central argument that the preschool advocacy community is splintered and fragmented seems both accu­rate and disturbing.

Still, I have two concerns. First, Karch’s key concepts could benefit from crisper definitions and a fuller discussion of cases that deviate from his story line. For example, the creation of two federally funded child care programs in 1990 might well be considered a critical juncture and a success for children’s advocates, including the Children’s Defense Fund, which spearheaded the earlier unsuccessful fight for reform. These new programs provided child care for many disadvantaged mothers with young children. Sometimes nonincremental reform is possible in this policy domain, even in Washington, D.C.

Second, Karch’s evidence in support of some key assertions is slim. He portrays the 1970s as an era of strong state activism on early childhood education. Yet much of what happened then involved the creation of offices of child development. Some observers would regard this as symbolic politics (much later, the states did indeed promote preschool successfully and aggres­sively). Also, the causal connection between assorted interest groups and the failure to adopt various congressional bills during the 1980s and the 1990s is not firmly established (Karch does a better job of demonstrating that Head Start supporters helped to discourage pre‐K growth at the state level).

If we fast forward to preschool politics today, let us consider the future of President Barack Obama’s universal preschool initiative, which builds on successful programs in Georgia, Oklahoma, and other states. As Karch would predict, the proposal faces tough sledding on Capitol Hill. Yet it is difficult to lay the blame for this on a fragmented preschool advocacy community. Instead, divided government, intense partisanship, a crowded agenda, prolonged inat­tention to our national debt, and weak political leadership seem much better explanations for stasis on this issue.

On the bright side, state governments, which doubled their enrollments of four‐year‐olds in state‐funded pre‐K between 2002 and 2012, are once again strengthening these programs, as they emerge from the Great Recession. The states are at times a better forum for policy innovation than the federal government.